The CYBERWISER.eu Open Pilot Scheme was launched at a workshop in Pisa early in November 2019 and more than ten organisations from around Europe have signed up for free staff training.

In terms of the scheme, the candidate organisations have the opportunity to nominate a maximum of 200 employees to undergo between three and six months’ cybersecurity training on CYBERWISER.eu, an integrated online platform being developed by the Cyberwiser.eu partner consortium to cater to the learning needs of users across the board from the non-technical to those with specific responsibility for technology and security.

The platform is unusual in that it incorporates both a cyber range simulation platform and a comprehensive suite of online courses. The learning content itself  - also being developed by consortium partners - is in a modular format and therefore completely customisable to the requirements of individual learners and groups.

Speaking at the Open Pilot workshop where the Cyberwiser.eu platform was being showcased to the public for the first time, Paolo Lombardi, a director at Cyberwiser consortium partner Trust-IT Services, said that while three full-scale pilots were baked into the structure of the project, the open pilots would be both an important test bed for the platform during ongoing development, and a means of promotion and community building.

Also present at the launch workshop alongside CYBERWISER.eu consortium partners were representatives from the European Competence Centre Pilot Projects, recently established with EU funding to prepare the European Cybersecurity Competence Network. In a panel session during the second half of the morning, workshop delegates were introduced to each of the four projects - CONCORDIA, Cybersec4Europe, ECHO, and SPARTA – before being invited to present their own organisations and training requirements via a one-minute pitch. The session was moderated by Cyberwatching.eu coordinator Nicholas Ferguson of Trust-IT Services.

Preparations are now underway and the open pilots will all commence early in the new year. 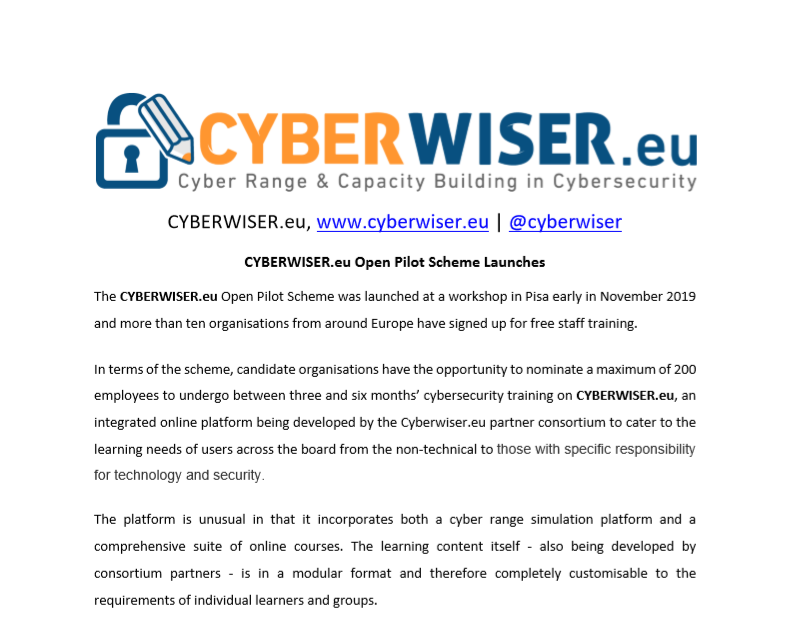